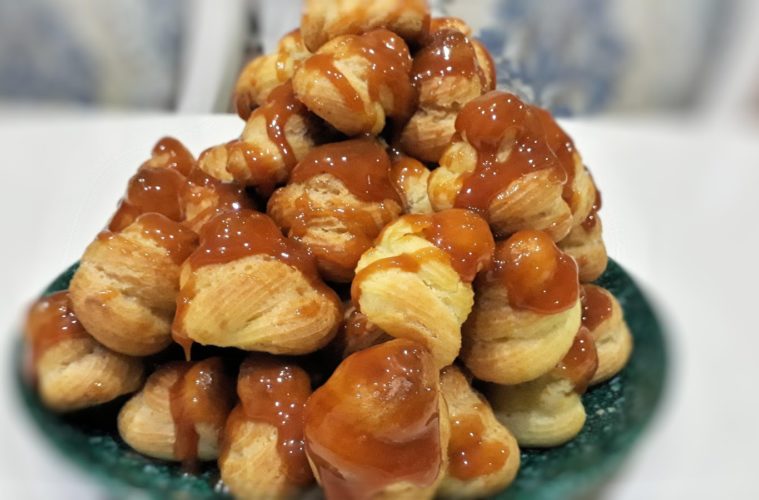 I watch anime from time to time. My best by far is one piece. I think it is the longest running anime of all time; it started in 1999. I was still in primary school then.

I was watching this episode and I think it is the first time we get to see a character called Big Mom. She is one of the top four pirates in one piece, usually referred to as a Yonko. Big Mom is destroying her town shouting ‘Croquembouche!’. Apparently, she has a sweet tooth and once in a while, she loses her mind when she doesn’t get a particular food to eat. That day, it was croquembouche.

She goes around wrecking havoc in her own city. She even killed one of her sons when he tried to stop her. Yeah, it was that deep. Eventually, she got her croquembouche and everything went back to normal.

Naturally,  I was curious about this croquembouche. First, it is a freaken long word; I still find it hard to pronounce. I soon respected the name when I saw the process involved in preparing it. Basically, there are three stages; first make the pastry cream, which is really custard then prepare the Pâte à Choux, which is really churros and lastly, caramel sauce.

I started with the pastry cream. The main ingredient here is really the eggs. Egg yolks to be more precised, I used about 9 of those. I went a little step further though, I added chocolate to the mix. Turning it into chocolate custard.

I put that in the fridge to cool while I thought about what to do with 9 egg whites. There was no way in hell I was going to throw them away. Something almost immediately came to mind; Angel Cake. I had never made it before. I just thought that wasting egg yolks didn’t make sense.

It is pretty easy to bake; egg whites, sugar and flour and you have essentially angel cake, after preparing of course. That’s what I did, I made angel cake and it came out wonderful.

Pâte à Choux was next. It’s hot mixture of water, milk, butter and sugar, combined with flour and brought to cool. Then one by one or in my case two by two, you add eggs. This is where elbow grease comes in. You can use a mixer if you are feeling lazy though.

The resulting mixture was placed in a piping bag and I made my design on a baking sheet.

This was baked and left to cool. I also brought the custard out of the fridge to warm up a little.

As I waited, I remembered I had bought a red snapper fish. I wanted to make something special for a friend of mine. So I started my lining the insides of a pack with slices of cucumber soaked in lemon juice and honey.

Then I grilled the red snapper. I wanted to make mashed potatoes but I realised I was out of potatoes but I had yam. So I boiled the yam, mashed it, put it in a piping bag, then to a baking sheet and I baked it.

I have probably made a new type of dish and I don’t have a name for it. Funny enough, the friend I made it for ended up not eating it. Such is life I guess.

By the time I was done, the Pâte à Choux had cooled and the custard was just right.

The custard went into the Pâte à Choux holes one by one; it was really a strenuous workout but I got it done. I then made some caramel and dipped the top half in it while making the famous croquembouche tower.

I had a taste of this wonder of nature and I must say, Big Mom had the rights to wreck her town. I really can’t say anything about her killing one of her children though. Then again, she has a loooottttt of children.