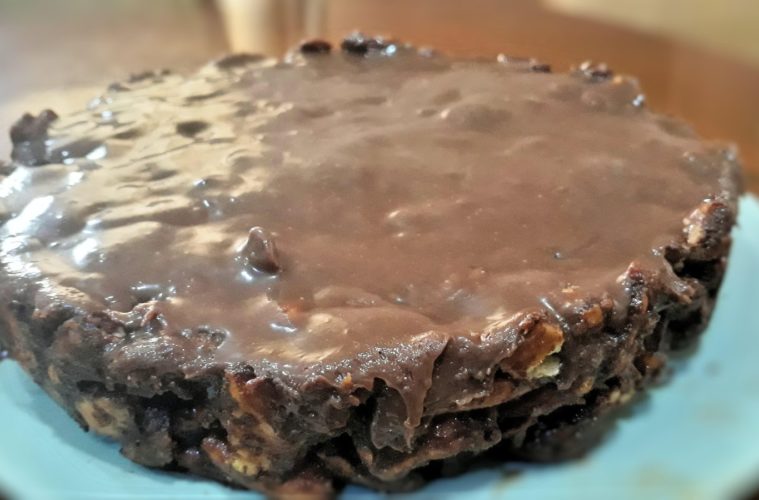 Work can be tiring most times. Having to wake up early in the morning and getting home late at night makes me miserable at times. This week was no different. It was no surprise when I didn’t realise I walked into a store and bought a ton of biscuits. What was I thinking? I really can’t answer that.

I get home and I was staring at these biscuits and the biscuits were staring at my soul. I had few options though, to give out the biscuits to the street kids or to just binge on the biscuits myself. We both know I did neither of them because I wouldn’t be here talking about this.

When life gives you biscuits, you make biscuit cake.

In my case, it was chocolate biscuit cake. I had seen a recipe to prepare it a few weeks back. I hunted the recipe down and began preparations. It is probably the easiest type of cake you can make. I put cocoa powder, chocolate, syrup and butter under medium heat to incorporate them together. I broke the biscuits into smaller chunks and mixed them with the chocolate mixture. I lined a cake tin with grease-proof paper and poured in the mixture. I then used a spoon to press the biscuit mixture until it became smooth. I put the whole thing in a freezer for about 4 hours.

I wanted the top of the cake to make it look nice. So made a quick ganache; chocolate, milk and butter. I poured the mixture on the frozen biscuit mixture and put it back into the freezer for another 2 hours. I think a picture at this point in time would help seal the deal.

I actually didn’t have a taste of this just yet. After all the little work I put into this, I realised I was hungry and I had only gone about half way through my biscuits.

I went to a store and bought, plain vanilla ice cream, beef, corn and veggies. Little did I know I was about to make memories with these items. I started with the corn. Seeing that it was sweet corn, I just rubbed it with some oil and popped it into the grill.

I flavored the beef with salt, pepper and Worcestershire sauce. I also did something naughty. I blended the remaining biscuits into a sandy form and flavored the beef with some of the sandy biscuits. I used this to make beef skewers. Lastly, I chopped up the veggies, put some oil in a pan, fried some biscuits in the oil and added the veggies. Yeah, I know its strange but desperate times.

You do have to admit though; Oh La La.

I didn’t forget the ice cream. I whipped some cream and added the remain blended biscuits in and mixed them together. I whisked the mixture into the ice cream and the result was Biscuit Ice cream.

Now I could have the chocolate biscuit cake with my vanilla biscuit ice cream.

You know after all these, I still had some biscuits remaining? Guess what I did to them…