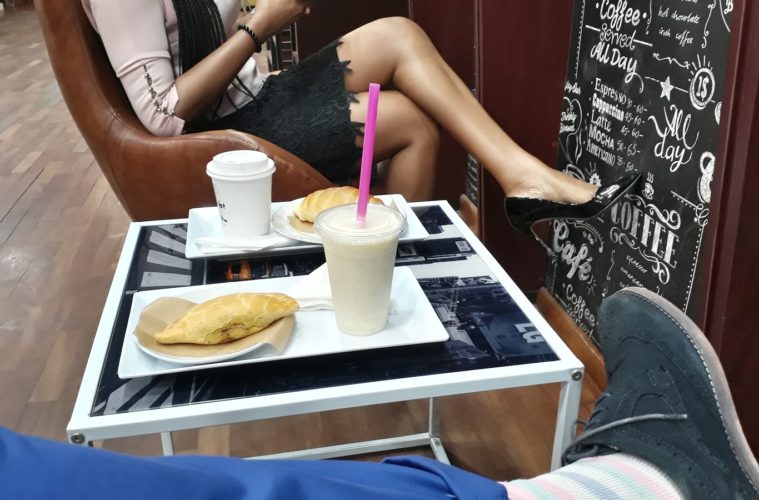 Ideas can happen in the most unlikely places

There is this writing in front of the restroom at my workplace. It says “Ideas can happen in the most unlikely places” I know, it’s strange.

Funny enough, some of my best ideas have originated from having showers or using the toilet, at home of course. The writing on the wall got me thinking. These ideas that originate from restrooms and showers, how do they become a reality? There should be a meeting point where these ideas come together and in most cases, become multi-million dollar businesses.

I am sure most of us know that some of the famous, baddest companies of our time started in garages; Amazon, HP, Apple and Google are some of them. I wanted to bring this down to our level, here in Nigeria. We generally don’t have garages, we don’t see the need, when you can park your car by the roadside. I know my mum would turn that garage into a boys’ quarters to rent out.

So I continued to ponder on a general meeting place for ideas (in Nigeria) and it hit me like Ewa Agoin on a saturday morning.

There is this almost rugged place in Silicon valley called Buck’s Restaurant.

Don’t be fooled by the look of the building. This building has witnessed startups that ended up having a combined worth reaching billions of dollars. Companies like Hotmail, Paypal and Tesla began here. The building has seen the Dot Com grow from a toddler to the goliath it is today. It has met presidents, witnessed multi million dollar deals and was there when relationships forged in its walls would last for generations to come. It’s amazing how such a building which was established a year after Mandela was released from prison has spent as much time as Mandela’s prison sentence and has achieved this much.

This got me all pumped up. There must be something in the atmosphere at Buck’s restaurant because I know it isn’t the food, neither is it the interior decor. I decided to set out to look for a place like Buck’s restaurant here in Lagos. Lagos is afterall the hub of Africa; shoot me if you disagree.

Just the way Buck’s restaurant is close to the famous silicon valley, I looked at our own “silicon valley” in Yaba. I personally don’t think it has lived up to its nickname though.

I really did not find anywhere to draw out inspiration from in Yaba. So I went back to the drawing board. I soon realised that technology isn’t the heart of Lagos, it doesn’t define Lagos, Finance is the true heart of Lagos. That’s how I found myself in the centre of the financial sector in Nigeria and probably Africa, Victoria Island. Don’t let anyone deceive you that its Lagos Island. Lagos Island is a market place, Don’t be misinformed.

Buck’s Restaurant really isn’t a restaurant. Of course it says Buck’s Restaurant but it really isn’t; it is cafe, more of a coffee shop. My mindset changed at this point. It makes sense now. You go to a cafe to have coffee or tea. These two products have some impressive effects on the body. Caffeine for instance is really a psychoactive drug. It builds up adrenaline which increases the heart rates, gets the blood pumping and opens the airways. All these would eventually reach the brain. Just like a combustion engine, the brain loves oxygen and blood. I need not say more. I believe you understand what I am trying to say now.

I set out to look for a cafe. I really didn’t have to go too far. Vestar coffee was really my first and only choice. So I have the ideas and I have the venue. I needed one last thing, someone who can resonate on my level. To understand what my insane, brilliant, corusating mind has to offer. Again, I didn’t have to look too far.

My adventurous Stella was really excited to come along; I now have all I need. We snuck out of work on a Friday morning to Vestar coffee. I wanted to capture the energy that the likes of Elon Musk captured when Paypal was born or during the early days of Tesla.

I must say, I wasn’t disappointed. The ambience there is inspirational. I would love to meet the interior decorator that designed that place. It is what a coffee shop should look like; you’re not there to leave quickly neither are you there to stay for long, it is just right.

I ordered a Sunshine Flush; a smoothie that contains pineapple, banana, honey and yogurt, with meat pie. Stella got a hazelnut macchiato with a frankfurter sausage roll.

I am not a fan of coffee, so I really wasn’t going to have any. The aroma of the place however, got me on a coffee high. I am not sure if it’s like second hand smoking or it was just a placebo but I could feel those airways opening up.

The exciting thing was Stella only had a small window of time to hang out, about 30 minutes. So we had to lock and sync minds before we ran out of time. Because in settings like this, time is of the essence. The people involved in mega deals don’t have the time to spend hours in a cafe; at least that’s what I think.

Like I said, I am not sure if it was just a placebo but the 20 or so minutes we discussed in the coffee shop was more productive than all the conversations I had all week.

But then again, If you can’t get inspiration from this, then you are searching for something else.

This is where my journey ends. Nigeria is generally a country that isn’t fascinated with documentation for future generations. For all we know, potential multi billion dollar deals might have been made at Vestar Coffee but we wouldn’t know until the potential becomes a reality.